The realization of the Egyptian medical writers that certain agents can prevent conception and cause an abortion emphasizes the antiquity of human efforts to prevent or destroy unwanted pregnancies. Although there is less surviving evidence from the Tigris-Euphrates valley, there are tantalizing references. A Sumerian tablet written earlier than the Kahun Medical Papyrus has a fragment of a recipe for a woman who wants to abort a fetus, but the instructions are lost. A cuneiform recipe from Assur advises inserting wool soaked in pomegranate juice in the uterus probably as an abortifacient or contraceptive. [1]

Soranus of Ephesus, a Greek physician who practiced in Rome in the second century of the modern era, is the major writer of antiquity on gynecology. He, like other physicians of the time, traveled widely, and he was highly regarded by his contemporaries and successors. Part of his book, Gynaecology, is devoted to describing the necessary qualities of a midwife. He denied that women had seeds (female semen) but also held that women were not radically different from men, as Aristotle had argued. Soranus believed that conception was not possible without the woman having an orgasm since he held that during intercourse the cervix dilated to receive the seed. He also believed that the clitoris was important in arousing the woman. He clearly distinguished between contraceptives and abortifacients and included a number of factual prescriptions, including oral herbal remedies and vaginal suppositories. Many of his suppository recipes contain pomegranate skins, which modern science has demonstrated to be effective.[2]

The major writer on contraceptives and abortifacients after Soranus and Dioscorides was Aetius of Amida, who wrote his magnum opus, the Tetrabiblion, in the sixth century. Aetius was court physician to the emperor Justinian. A Christian, born in the upper Tigris valley area, Aetius was trained in medicine at Alexandria. Many of his herbal recipes for contraceptives are derived from Soranus but he modified some and added his own. One of his prescriptions for a contraceptive, a combination of pomegranate, tannin (made from oak galls), and wormwood, would probably have been highly effective. He also includes vaginal suppositories, which he labels by a Greek word that could be translated as "unconceivers" or "sterilizers."[3] 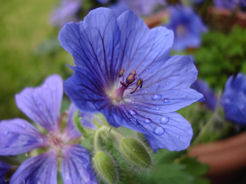 Sometimes, herbs widely used in some periods are not used in others, perhaps indicative of the nature of oral transmission. The seeds of the pomegranate, for example, were widely used to prevent conception in the ancient world and they are still used in India, East Africa, and the Pacific. Modern animal studies have demonstrated that the seeds do have contraceptive value. Female rats fed pomegranate seed and paired with male rats not fed it had a 72 percent reduction in fertility. Guinea pigs subject to the same diet had a 100 percent reduction. But if it was so effective, why was it not used in medieval or modern Europe or the United States? Perhaps simply because it was not grown in the more temperate climates and there was no widespread trade in it because its use was not known in Europe and the United States.[4]