When Colorado biologist John Woodling and a team of researchers pulled fish from the South Platte River and Boulder Creek two years ago, they found deformities they'd never seen before.

Some had both male and female sex tissue.

The fish, white suckers native to Colorado, were swimming in the waters downstream of the Denver area's largest sewage plants.

And the team found something else: Females far outnumbered males in these wastewater soups.

"This is the first thing that I've seen as a scientist that really scared me," said Woodling, 58, a retired fisheries biologist with the Colorado Division of Wildlife now working with the University of Colorado.

The discovery of these freak fish just below Denver and Boulder has sent chills through the ranks of the Environmental Protection Agency. When they learned of Woodling's initial find, officials speedily approved a $100,000 grant so his team could expand its investigation. 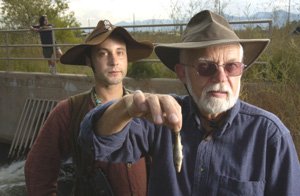 Federal officials want to know whether the abnormalities - the first of their kind discovered in Colorado and perhaps the nation - are a result of the chemical brew now flushed by state sewage treatment plants. So far, the team can say only that they have consistently found these changes in fish collected near these two wastewater pipes.

After Denver, the towns of Brighton, Gilcrest, Platteville, the Morgan County Water Quality District and a host of small communities all the way to the Nebraska border pump their drinking water from shallow aquifers connected to the South Platte (see graphic). But it is not known whether the chemicals are present in their supplies.

What's more, little is known about how this pharmacological cocktail affects those who might consume it in drinking water.

One troubling group of these pollutants are called endocrine disrupters because they either mimic or upset hormones - in this case, estrogen - fooling the hormone system of male fish into producing the cells of female fish.

The CU team is now waist- deep in its quest to determine whether disrupters in those wastewater flows are turning boy fish into girl fish - or something in between.

Officials with the Metro Wastewater Reclamation District, the largest sewage treatment agency between Los Angeles and St. Louis, cautioned that it's too soon to tell what the fish deformities represent.

"We're all concerned about it," said Barbara Biggs, Metro Wastewater's governmental officer, who added that the agency supports Woodling's research and other studies into the chemicals. "We don't want to leap to any conclusions yet. There are a lot of estrogen sources in the environment, and this is going to take time." 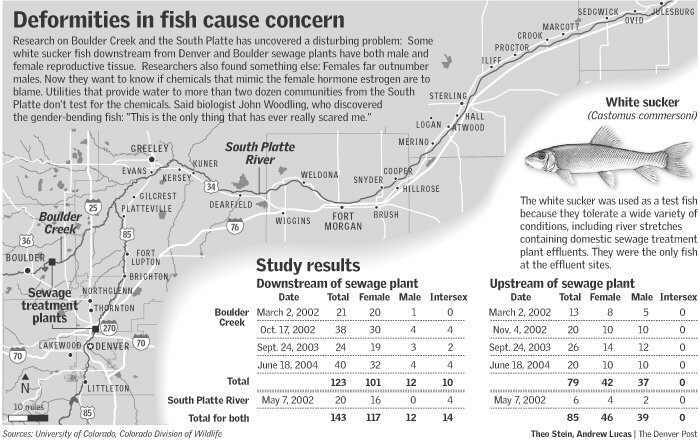 CU professor David Norris, the research project leader, agrees. "We don't know the dose that produces effects in this species."

But the concentrations of chemicals found in Boulder Creek are high enough to cause the feminizing effect in other fish, added Alan Vajda, a CU doctoral student on the research team.

Denver Post reporter Theo Stein describes how the mutant fish were found in local rivers, and what may be causing the deformities.


The findings, which snagged the attention of the EPA's highest echelons, may have been the best kept secret in Colorado water science.

During the last five years, researchers with the U.S. Geological Survey have found a striking range of estrogen-related chemicals in Colorado waterways, including the South Platte River and Boulder Creek, where the team has found deformed fish.

Among the leading suspects in the gender-bending fish phenomenon: excreted birth-control hormones, natural female hormones, and commonly used detergents, which can also mimic the chemical structure of estrogen, one of nature's most potent and important hormones.

Hormones are one of life's great chemical messengers. Released by the body's glands, they travel through the blood until they link with a target molecule, like a key into a lock. They then transmit signals that instruct a cell, among other actions, to produce proteins or to multiply.

Hormones are involved in just about every biological process: reproduction, growth, immune function, even the development of a fetal brain.

They work in infinitesimal concentrations - as low as parts per trillion or even parts per quadrillion. And the hormones typically work in a tightly defined window in an organism's development.

Endocrine disrupters work by transmitting misinformation. A chemical that looks like estrogen, for example, can lock onto a receptor molecule and prevent a cell from receiving a necessary signal. Or it might transmit a stronger or weaker signal than the body's own hormone. And at the wrong time.

Norris, who was on Woodling's Ph.D. committee, said that over the last 10 years, scientists have documented the impact of endocrine disrupters on everything from British trout to Florida alligators and Arctic polar bears.

Little research has been done on the effects of chronic low- dose estrogen exposure in humans. But Norris pointed out that the estrogen-based pregnancy aid DES resulted in cancers and reproductive disorders in the children of mothers who took the drug in the 1950s and '60s.

Woodling's Colorado fish study began after he read about the discovery of intersex trout below sewage plants in Europe.

Searching below Denver and Boulder sewage plants, the researchers found only one species that could survive in the effluent - the white sucker, a homely bottom-feeder.

Woodling's first sample on the South Platte below the Metro Wastewater plant produced 16 females and no males.

But they also found four fish whose reproductive organs were so mixed with male and female tissues that they couldn't assign a gender.

Woodling quickly arranged a meeting with the EPA.

"Their eyes got real big," he said. "They told us to put in the paperwork. It moved quickly."

The team was given a grant to further their research with more collections and more blood and tissue analysis. Among their goals was to go upstream of the treatment plants to see whether they could detect the same deformities.

Although scientists have found these "environmental estrogens" in surface waters, federal and state regulatory agencies are not testing for them. Neither are the companies supplying drinking water.

Thornton, which diverts drinking water from the South Platte below the Bi-City Wastewater Treatment Plant in Englewood, recently installed an expensive reverse-osmosis water treatment system. It removes low concentrations of organic chemicals and endocrine disrupters, even though science has yet to prove they're harmful, said Vic Lucero, Thornton's water quality administrator.

As for other users of treated river water, Norris advises them not to wait for regulations to catch up with science.

A 0.2-micron filter with an activated-charcoal system will remove most endocrine disrupters as well as other chemicals from tap water, Norris said.

Woodling and his team expect to have much of their own research done by next spring. But, he said, what he's found already is profoundly unsettling.

"It's one thing to kill a river," said Woodling. "It's another thing to kill nature. If you're messing with the hormonal balance in your aquatic community, you're going deep down. You're twiddling with how life proceeds."